Are you totally new to Tang fish? It would be good to find out what kind of Tangs is easier and simple to keep in your tropical fish tank. This will definitely provide you confidence and permit you to gain experience with Tang fish care and know their “secrets”. 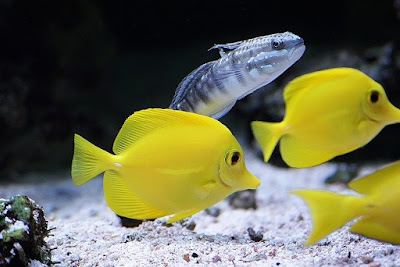 Beginners will do well to add the following surgeonfish to their saltwater aquarium:

The affordability of these Tangs decreases roughly in the order listed.

How the Tang Fish Got Its Name

Table of Contents
1. How the Tang Fish Got Its Name
2. Acanthuridae, Surgeonfishes, Tangs

Fancy the Yellow Sailfin Tang? Just imagine how lovely this Tang will look in your marine aquarium. Are you missing out on this beauty?

Tangs are the smaller members of the Acanthuridae family, otherwise called the Surgeonfish group because of the scalpel-like spines located near the tails of these fish.

Since the Tang feeds mostly on algae, its name was coined from the German word “seetang”, which actually means kelp or seaweed. There is somewhat a nice ring to this name, I must say.

Tangs have lots of beneficial bacteria in their alimentary tracts to assist in the breakdown of plant food. Therefore, medications, especially those containing copper, must be administered with great care. Doing so will avoid wiping out these good bacteria in the Tang and compromise its digestive ability.

Interestingly, color can tell you the mood of your Tang fish. For example, the popular and appealing Yellow Sailfin Tang (pictured above) — also known as Zebrasoma flavescent — will develop a vertical white band on its body during the day when it has been frightened. Be mindful of such signs to understand the health of your Tangs in your marine aquarium.

Taking care of Tang fish can be slightly daunting for those who are not familiar. You can learn how to care for Tang fish with fish care guides such as the “Saltwater Aquarium Secrets” eBook.

The Tang fish belongs to the Acanthuridae family and is also called a surgeonfish — it got the “surgeon” name because the sharp spine at the base of its tail looks like a surgeon’s scalpel. A large Tang can use this spine in defense to inflict a nasty albeit non-poisonous cut.

Hobbyists often face problems with keeping Tangs, mainly due to their size and vulnerability to parasites. Most Tangs mature into quite large adults, which would mandate a 75 to 100-gallon aquarium tank just to provide the swimming space they need. And even with such a big tank, it can be difficult to keep more than one Tang of the same species as they tend to be very territorial.

In case you have a large enough fish tank (at least 100 gallons) and would like to keep a few Tangs of the same kind, remember to introduce them into the aquarium all at the same time. Doing this can alleviate the aggression associated with the “new fish on the block”, so to speak.

The parasite issue with Tangs occurs most often when the Tang fish is being shipped and introduced into the captive environment of a marine aquarium. Should this be seen, careful quarantine measures must be exercised to prevent other fishes in the aquarium from being infected.

Surgeonfishes or Tangs require a diet high in vegetable content and need to be fed several times each day due to their high metabolism rate. Suitable food includes nori, Spirulina algae, and spinach. Fresh Caulerpa algae can also be given for a change, once in a while.

To ensure that your aquarium is thriving with those good looking Tangs, learn more about them from the Tang Fish Secrets Official Website.

Look after your Tangs well and you’d be rewarded with the beauty and grace of these colorful and playful fish. Enjoy your aquarium!