Top Reasons Fish Gasping For Air In Aquarium:  How to Increase Oxygen in Fish Tank?

Any idea if you have a fish in your tank gasping for air what you would do? Here is our suggestion on what you should do if your fish are gasping in the aquarium…

If the amount of oxygen becomes short in the aquarium water it may result in your fish swimming to the surface of the tank to breathe; the concentration of dissolved oxygen is highest in this case.

When you notice in your tank that the majority of the fish are gasping for air to breathe close to the surface, you should act immediately. This is a sign of distress. Then ask yourself the following questions:

Is the water cloudy (or polluted due to overfeeding)? If so, then replace up to 1/3rd of the polluted water in the aquarium with clean water. Always keep in mind to use the right treatment/composition and temperature.

Are there any dead fish in the tank? If so, take away them right now, and change up to 1/3rd of the water if decay has polluted it already.

Are your aerators (bubble wands, airstones, etc.) working perfectly? Did your aquarium air pump malfunction? Check your all tubing and equipment, and replace, adjust, or repair accordingly.

Bear in mind that bubble wands and airstones can easily get clogged with slime and algae and have comparatively short lifespans. Buy these products always in twos or threes so that you can have sufficient on hand when they stop functioning.

How to increase oxygen in the fish tank? Are your aquarium’s ammonia, oxygen levels, nitrate levels, and temperature in an appropriate range? Any kind of discrepancy may upset the balance of the fish tank.

Has your fish tank been contaminated by any harmful material like biodegradable (water-soluble) items or metal that may have been inadvertently placed into your fish tank?

If so, take away the toxic material as soon as possible and replace up to 1/3rd or half of the water as required.

With the high heat of this season, water replacement may also be needed to replenish the level of fish tank oxygen, and again temporarily cool the water the temperature of your fish tank to provide the fish a rest time.

When Your Fish Breathing Fast and Fish Staying At Top of Tank What To Do? 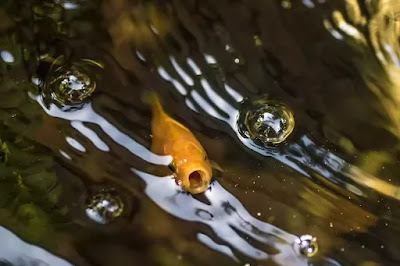 Do fish need oxygen? The surface of water contains the best levels of dissolved oxygen.

Therefore, when fish is not able to get too much oxygen in the fish tank they will raise to the top of the water level and fish gasping for air. But, the reason for that gasping could be because of so many factors.

Various types of diseases that have an effect on the gills may also cause fish gasping for air. Seek for signs of infection such as clamped fins, spots, secondary infections like bacterial diseases or fungus.

Several of those attack gill tissue, which either causes the fish to produce extra mucus or damages those tissues which could reduce the level of oxygen fish will extract. Gill diseases likely to be tricky to diagnose accurately.

So if you have checked everything properly else and suspect a gill disease then speak to an experienced fish vet or specialist dealer.

Test your aquarium water at the initial stage of trouble. Because both ammonia and nitrite have an effect on the gills that may cause your fish gasping for air.

When ammonia exists in the tank then fish generates extra mucus, which reduces the surface area of the gill. It causes the fish very less effective at the time of extracting oxygen.

Blood is affected by Nitrite. It changes the hemoglobin bit which carries the oxygen. Therefore fish gasp in trying to extract the oxygen they require from the water.

Any signs of nitrite or ammonia are worrying and it’s dangerous. Immediately change your fish tank’s 50% water, fill up with dechlorinated tap water and check out to see why the biological filter is not operating properly.

Then look for further emergency help from your fish dealer.

As and when the water becomes warmer, the less amount of oxygen it can hold.

Check your tank’s water temperature regularly, as it must be within the range of 24 to 28°C and 75 to 82°F for a tropical freshwater fish tank.

In hot weather, your tank will be overheating naturally, so always try to keep your aquarium cool and increase the volume of aeration.

Do not always blame temperature as sudden gasping issues are often related to disease or pollution.

If the aquarium heater has malfunctioned it might have stuck in the ‘on’ position, which causes overheating. Generally, fish gasping for air is an early sign. It shows that something is wrong with your fish.

Therefore, if your aquarium becomes heat extremely and the heater light on the tank might be answerable. It will require replacement. If it is the case, the tank’s temperature will be terribly high — sometimes well over 30°C and 86°F.

Heaters are typically reliable, however, once they go wrong the results are usually devastating.

A very little amount of oxygen or a high amount of carbon dioxide (CO2) may also cause fish gasping.

If CO2 is being dosed on a planted aquarium, remember to check that you are not adding too much CO2. If the unit of your CO2 has broken and releasing a high amount of gas, you should increase the volume of aeration to drive it off.

If you own a pond or planted tank and your fish gasping for air, the very first thing in the morning, the algae or plants most likely have depleted oxygen levels during the night and boosted CO2 levels. Increasing the aeration at night typically solves this issue.